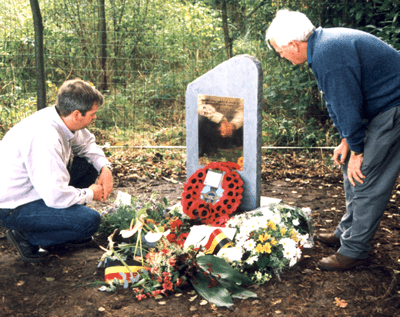 Shot down by Flak near to the villages of Retie and Kasterlee, Belgium

51 Squadron RAF Snaith, Yorkshire – 22nd October 1943, Sgt. Hall (RCAF) and the rest of his crew climb aboard Halifax JN920 for the last time. Having just completed a briefing, the target for tonight being the industrial town of Kassel, the crew commence their pre-flight checks.

The four engines eventually crackled into life and at 17.55 hours the bomber left the ground for the last time. Later that evening the Belgian hamlets of Retie and Kasterlee were alerted by the sound of low flying aero engines and went outside to see the source of this disturbance. The crippled bomber was seen circling the villages in flames.

Suddenly JN920 pitched forward and plunged into the ground with a terrific explosion. Thus it was that seven brave young men met their tragic and untimely deaths at Retie.

The following morning found the area of the crash sealed off and under guard by the Germans, a huge blackened and smoking crater all that was left of JN920 …until now.

The crew of Halifax JN920

The search is on…

During the summer of 1998 the Wings Museum began its investigations into the crash of a Halifax bomber lost on operations from RAF 51 Squadron on 22nd October 1943.

After several trips to Belgium, the team finally located the crash site near the village of Kasterlee and Retie with the help of local residents and historians. The remains of the Halifax were located in a very boggy area using deep searching equipment. The landowner kindly gave the team permission to excavate the aircraft. It was hoped that some clue might be found as to the reason why this bomber crashed on its way to the target area. As part of the investigation it was agreed with the local community that it would be a fitting tribute to erect a permanent memorial on the site of the crash to commemorate the loss of this gallant young air crew. It was also decided to mount an exhibition dedicated to the memory of these men for the benefit of the local communities of Kasterlee and Retie and to share the group’s findings.

With the final permissions in place, including that of the local Mayor, a mechanical excavator was provided and the recovery of JN920 began.

Not long after the first bucket of soil was removed from the site, parts of the bomber began to emerge. Telltale black oil stains in the sandy soil and a strong smell of aviation fuel quickly told us that the excavator had found one of the areas where a Merlin engine had penetrated. Sure enough a propeller hub complete with the wooden propeller roots still evident, was brought to the surface along with many pistons, pieces of engine casing, engine data plates, a propeller reduction gear and an engine generator with its shiny brass identification label twinkling in the sun.

Next to the remains of the engines the team found parts from the bomb bay and fuselage. A rather bent and battered escape axe dated and stamped “Air Ministry 1943” with the King’s Crown was also discovered.

Moving along the wing, we found remains of the aircraft dinghy. Parts of the starboard engines and an under-carriage leg were also recovered together with pieces of armour plate. However, by this time, the hole we’d dug had started to fill with water and it became impossible to see where we were digging due to the amount of it. Luckily, the local fire brigade were on hand to attend with two pumps to pump out the water. Eventually, thanks to their help, work was able to resume, although conditions in the hole were treacherous to say the least. As Saturday drew to a close the exhausted team retired for a well earned Belgian beer.

The following day found the hole again full of water, the situation having been made worse by rain in the night. The remains of the fourth and final engine were located.

The excavation was completed with the final shaping of a pond (as agreed with the landowner). Halifax JN920 had revealed the last of her secrets.

The memorial dedication to the crew of JN920 took place on 23rd October 1999 and is considered by many to be one of the first such memorials unveiled in Belgium. Since that time the Wings Museum with their Belgian friends have gone on to erect a further 3 memorials to RAF Air crews in Belgium.

Fifty seven years after JN-920 was shot down, ghostly echoes of that fateful night still reach us.

In late 1999, a memorial service and dedication were held at the crash site in Belgium with family of Sgt. Lewis and the daughter of Sgt. Cowie in attendance.

Aviation historian brothers, Daniel and Kevin Hunt from the Wings Museum, who research the young aircrews who risked and often sacrificed their lives while flying missions deep into occupied Europe, had spent two years researching JN-920 and tracing surviving family members of the crew from all over the UK.

Relatives of Sgt. Lewis (the rear tail gunner) and relatives of Sgt. Cowie (the mid upper gunner) made the long trip to witness the unveiling which took place on the 23rd October 1999 at the now tranquil scene of the crash.

Personnel from 51 Squadron now based at RAF Waddington made the pilgrimage to remember those fellow airmen that failed to return. The whole incident grabbed the interest of the local town and the memorial dedication was featured on Belgium TV as well as in the local press etc. Many residents from around the area young and old attended to witness the service ­ some walking miles to the site. Young and old were touched by the dedication service, after the ceremony a young local boy of around 3yrs of age was seen to grab a handful of grass and place it gently down onto the memorial in memory of the crew.

After the war was over the next-of-kin of the crew were informed that their loved ones had been buried at the military cemetery at Schoonselhof, Antwerp. However, for some reason this information did not reach the relatives of Sgt. Lewis. Relatives of Sgt. Lewis always believed that he was missing and they where overwhelmed when they heard from the Hunt brothers that Sgt. Lewis had received a Christian burial and was laid to rest at the Schoonselhof Military Cemetery and that a permanent memorial was to be unveiled later that year. At last they could pay their emotional respects to a much loved relative.

Since the unveiling, people still continue to visit the memorial and pay their respects to the aircrew who died there. The names of those young men who gave their lives are now permanently remembered.

The full story of Halifax JN920 her crew and many artifacts recovered from the crash site can be seen at the Wings Museum.

Thank you so much for the peace you have brought our family. We have grieved and worried about Uncle Vadre all these years. He was a dearly loved member of our family. I only wish his brothers and sisters could have been given this gift. It is priceless!

My nephew Hayden tells me this is a private mission of yours. You are commended for your efforts and I thank you for the chance to pay my respects to Uncle Vadre.

Letter of thanks from Canada, from the family of Sgt. Thomas Vadre Lewis – rear gunner on Halifax JN920

Shortly after the memorial service curators Daniel, Kevin and Brian Hunt were invited for a special tour around RAF Waddington to see the vital role that 51 Squadron play in today’s conflicts.

The museum was also honoured to stage an exhibition to the loss of Halifax JN920 alongside 51 Squadron History Team, where parts recovered by the museum from Halifax II JN920 were displayed to the public.

We would very much like to thank all the 51 Squadron History Team for their kind invatation and their time in showing us around the base. Our visit to RAF Waddington and RAF Snaith will remain in our memories for many years to come.