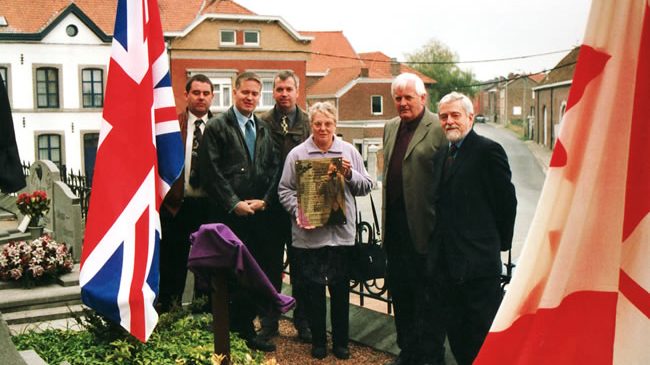 As a result of our memorial to the crew of Halifax JN920, we received a request from the family of Flt. Sgt. O’Neill concerning another 51 Squadron loss, Halifax III MZ565. The family were keen to know exactly where the aircraft crashed, as the exact details were uncertain. Shortly after this request the Wings Museum launched its search for the long lost bomber.

Handley Page Halifax MkIII (radial engines) Serial Number MZ565 was on an operational sortie to bomb the railway yards of Montzen on the night of the 27th/28th April 1944. The Halifax was airbourne from RAF Snaith at 23.57pm. At the controls was a veteran pilot F.S. J.H.P. O’Neill who had been awarded the British Empire Medal in 1943.

On the homeward leg of their long journey, they were shot down over the village of Villers L’Eveque in Belgium. At approximately 03.00 hrs eyewitnesses saw tracer bullets from a German nightfighter strike the engines of MZ565 causing the aircraft to spiral out of control. Shortly afterwards the aircraft exploded in mid-air, scattering wreckage far and wide at a place called Kemexhe, within the French speaking part of Belgium. The German nightfighter was most likely based at St. Trond airbase.

144 aircraft – 120 Halifaxes, 16 Lancasters and 8 Mosquitoes – of 4, 6 and 8 Bomber Groups took part in this raid. The second wave was intercepted by German nightfighters and 14 Halifaxes and 1 Lancaster were shot down, including Halifax MZ565.

The Crew of Halifax MZ565

Originally all 7 crew members were buried in a churchyard, but were eventually transferred to Haverlee War Cemetery in Louvaine, Belgium – Plot A, Row 1-4 collective grave 6.

Flt. Sgt. Joseph Herbert Patrick O’Neill, aged 29 from North Cheam in Surrey, was awarded the British Empire Medal at Buckingham Palace on 10th August 1943 following an incident that took place on the 20th December 1942 when, as Captain, he crashed on Scagglethorpe Moor near Poppleton in Yorkshire. He and his crew had just taken off from RAF Rufforth on their way to bomb Duisberg flying in Halifax W7784 with 158 Squadron.

Some members of the crew were trapped inside the wreckage and, although injured and burned, he resolutely refused to leave the scene. Disregarding his own injuries he worked inspiringly, directing and helping civilians attempt to save others in the wreckage. His efforts only ceased when he became unconscious due to loss of blood.

The Wings Museum managed to trace several eyewitnesses who saw the bomber’s final moments. From this information an extensive search over a large area was carried out at the crash site. Eventually many small fragments were discovered, including some pieces which had the Halifax drawing number clearly stamped on them.

A deep Magnetometer survey was carried out over the entire area but with little result. It is believed that the main wreckage was on the surface and removed by the Germans. This indeed matches eyewitness accounts of the aftermath.

With no monument to recall the horrifying events that took place on that fateful night, the Wings Museum, together with the local community, made plans for a memorial to remember the young crew.

Finally, in 2003, with several members of the O’Neill family present, the Wings Museum presented the community with a plaque which was unveiled at the War Memorial in the village, Villers L’Eveque, where it would be seen by all.

The crash site itself was carefully recorded, but, due to its rural location, it was considered unsuitable for the location to erect a memorial, and the village war memorial considered more appropriate.

However, the family still visit the site where their loved one lost his life, to pay their respects and lay flowers.

The plaque was later mounted by the community of Villers L’Eveque on a specially constructed stone marker close to the war memorial.

During our work searching for lost aircraft in Belgium over the past 15 years or so, we have always worked very closely with the local communities and authorities who have always made us feel so very welcome. Without the support of the local community these memorials would not be possible.

The Gyroscope from Halifax III MZ565 was taken at the time by Victor Dejardin who was a school boy at the time of the crash. Victor hid the parts at great risk to himself in a draw that was later used by one of the German Officers who attended the crash site the following day. Luckily the German Officer never looked inside the draw!

Victor kindly donated the parts to the O’Neill family during the memorial dedication and they later donated them to the Wings Museum where they are currently on display for all to see.