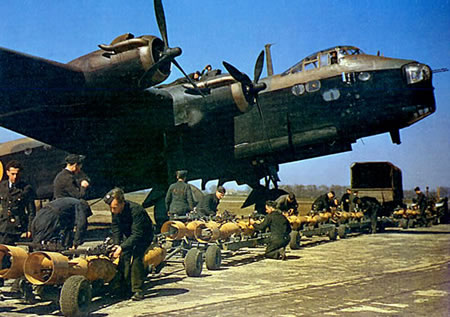 Short Stirling III BF479 OJ-E of 149 Squadron took off from RAF Lakenheath in England on the night of the 13th/14th March 1943. Its mission that night was to bomb Bochum in the industrial region of the Ruhr Valley in Germany.

24 aircraft and their young crews were lost on this raid. 13 Halifaxes, 6 Wellingtons, 4 Stirlings and 1 Lancaster.

The raid started well, but after 15 minutes what were believed to be German decoy markers drew much of the bombing away from the target. 394 buildings in Bochum were destroyed and 716 were seriously damaged. Tragically, 302 people were killed in the bombing.

The young crew of Stirling BF479, with their mission complete, began their homeward journey, but they were not safe yet.

At 03.05 hours on the 14th May 1943, when flying over Belgium, the crew requested a bearing, which was given – nothing further was heard from the crew of BF479.

At 03.15hrs, the Stirling crashed 10km south east of Turnhout, in the Vorsell, near Kasterlee. The German Luftwaffe were quickly on the scene to recover the bodies.

The crew of BF479 were buried locally at first before before being re-interred at Schoonselhof after the war.

The gun camera of Schellwat confirmed the kill, and, by the end of the war, he had a total of 17 confirmed victories.

The Crew of Stirling BF479

None of the crew survived the crash and all are now buried in Schoonselhof Cemetery, Commonwealth War Graves section.

Award of DFC: On 28th November 1942 F.O. Royde took part in an attack on Turin, their aircraft was repeatedly hit by flak. A shell rendered the captain Flt. Lt. Middleton VC (Victoria Cross) unconscious and wounded the 2nd Pilot Flt. Sgt. Hyder. Flt. Sgt. Hyder took over the controls and regained control of the aircraft OJ-H. By the skilful navigation by Flying Officer Royde enabled the aircraft to return back to the UK where due to lack of petrol the aircraft was abandoned.

Investigation by the Wings Museum

The crash site of Short Stirling BF479 had been investigated in recent years by Belgian recovery groups and individuals. Their investigations had concluded that there was nothing to find and that the aircraft had crashed in open farm land.

The Wings Museum Recovery Team first searched for BF479 in the late 1990s, but unfortunately the location was completely incorrect.

Later, further eyewitness reports came in, giving a more precise and accurate location. This led to the discovery of the crash site of BF479.

The Wings Team carried out their investigation while in Belgium to unveil a memorial to the crew of an Avro Manchester that had crashed nearby.

Starting their search in the field where it was thought BF479 had crashed, they soon discovered four very shallow craters in a wooded area where the four engines had burnt out. With some forensic style searching using a sieve, some very interesting and worthwhile finds were recovered for the museum from just below the surface. Some of these finds moved the team so much that it was decided on the spot that this crash site should be permanently marked in the way of a memorial to the unfortunate crew.

On return to England they at once began tracing family members. Meanwhile, Belgian friends made arrangements with the local community for a memorial dedication to be held the following year.

The Wings Museum is very fortunate to have the full support of the local community as well as the support from the town Major, and the memorial dedication took place on 24th and 25th May 2013.